Says the legend that near Magerit (the name of Madrid in old Spanish referring to the Arabic name of the old citadel, Medina Magrit), there was a valley owned by an Arab rich man called Kas. When the Christians conquered the village, the Christians forced him to run away and called the place Valle del Kas (Valley of Kas). With the time, the evolution of the name made people call the village Vallekas and, later on, Vallecas, to adequate the name to the Spanish good forms... this is a legend and has zero scientific support, but do not let the reality spoil a good story.

Vallecas was an independent village until the 1950s, when the government decided to merge the village with Madrid. Since the 50s, Vallecas started to host people from different cities of Spain, who were escaping from the poverty of their towns, to work in the capital of Spain. Vallecas was a kind of independent village inside Madrid, with humble low houses and disordered streets. In the 80s, drugs and degradation hit the village, but from the 90s to nowadays, the social work in the area recovered the place. In these days, despite the old village of Vallecas is divided in two districts Villa de Vallecas and Puente de Vallecas of nearly 240,000 inhabitants, Vallecas still keep a very particular personality. A village proud of their working-class origins and their independence from Madrid. Their inhabitants are not madrileños, but vallecanos.


In order to find the origins of football in Madrid, you have to go back to the end of the 19th century, when groups of youngsters started to create football teams, from their student residencies. Lots of clubs appeared (and disappeared) in the first couple of decades of the 20th century, not only in Madrid, but also in the suburbs. In 1914, the first club of Vallecas, the Numantino was founded. In 1924, from the ashes of Numantino, a new club in Vallecas appeared: the Agrupación Deportiva El Rayo. The uniform of the club was white shirt and pants and black socks.

In the 30s, in the years of the II República, Rayo joined the Football Worker Federation, along with other clubs of Vallecas, which was out of the professional leagues. At the end of the Spanish Civil War, in 1939, Rayo finally joined the Spanish FA through the Center Federation. In those years, the president Miguel Rodríguez Alzola started to build their first real stadium, El Rodival. Year by year, the club only grew, from regional divisions to higher cathegories. In 1947, they changed their name to the current one: Agrupación Deportiva Rayo Vallecano. Only one year later, the club reached Tercera División and reached an agreement with Atlético de Madrid to be their feeder team, due to the good relationship among the managers of both clubs.

As an anecdote, we have to mention the 1949/1950 season, when Rayo changed their white shirt for the current uniform with a red diagonal strip crossing their chest. River Plate visited the city to play a friendly against Real Madrid. The managers of Rayo visited the Argentinians, legends back then, to honor them and the humble club let them their stadium to train, where both clubs played an informal game. Some days later, a box from Argentina was received in Vallecas. The box was full of River shirts. Even though, the shirts had the kid size, the club adopted the River shirt as own. Despite Atlético Madrid wanted them to wear their shirt, Rayo kept their new shirt and never changed it, since the agreement with the colchoneros only lasted one year.


During the 50s and the 60s, the club enjoyed a phenomenal growth. Rayo built a new stadium and promoted to Segunda División, where they were during a short period. But in the 1970s, Rayo Vallecano finally found a stable place in the division, the club grew with the village and the promotion to Primera División was not a dream. They did it in 1977 and the 1977/1978 season was the first one of the club in Primera, where they were during 3 years. It was the times of Fernando Morena, Uceda, Felines, Tanco, Rial or Landáburu.

During the 80s, Rayo Vallecano suffered the bad times of the village and the team lived in Segunda B and Segunda for some years until 1989, when the legend Felines, now as coach, took the team to Primera División again. It was a shorter stage, only one year, and the crisis defeated them. The newly created sport corporations allowed the businessman Ruiz-Mateos to buy the club. Ironically, the club of the working-class was owned by a rich businessman and member of the radical and elitist Opus Dei, who had been prosecuted for corrupt actions in the 80s. Ruiz Mateos used the club as platform, for his own personal interest, but he also signed some important players in the early 90s, like the Austrian striker Polster or the Mexican legend Hugo Sánchez, who enjoyed there some of their last years in football. The club went back to Primera División in those years for another short period.

The golden era was with the change of century. Rayo Vallecano was able to stay 4 years in Primera División and they got a fair play licence by UEFA to play their UEFA Cup competition in the 1999/2000 season. Surprisingly, Rayo Vallecano reached the quarter finals and they defeated teams like Lokomotiv or Girondins Bordeux in their way. Only Alaves, who played the final against Liverpool later, were able to stop them.

In the year 2001, the Estadio Nuevo Vallecas (built in the 70s) changed its name for Estadio Teresa Rivero (the name of Ruiz Mateos' wife), which shows the ego of the family. In 2003, the club returned to Segunda División. The rest of the decade were dark years for the club. Rayo Vallecano had relegations and promotions in low cathegories. If it was not enough, the club was just another victim of the economic crisis, which also hit the owner's family businesses, including Rayo. 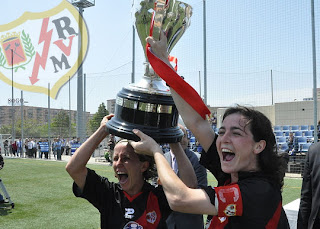 But Rayo and Vallecas are a unique case. The club stopped playing the players' salaries, but the fans and the players, most of them very humble, joined in a heroic fight. While the owner of the club was gone, as a coward, not paying anybody's wages, the fans supported the players and the players backed the fans. The crisis was everywhere, unemployment and unpaid salaries were suffocating the whole village, fans and players, but they were able to perform a fantastic season that has bringing them back to Primera División again in an epic campaign.

But the heroism of Rayo Vallecano goes beyond. The women squad have won the last 3 Ligas and 1 Copa de la Reina in the last 4 years. If the men struggled to get paid, the women team were not less, but still are able to make history and definitely are the best women football team of Madrid ever.

This is where the circle closes: Vallecas is Vallekas again. Vallekas, as the alternative and leftist movements like to spell the name of the village. Next year, in the same league of Messi and Cristiano Ronaldo, there will be a club of a district of Madrid that was once a village of workers, a club whose players are workers of football, who still suffer from the excess of this kind of greedy and egocentric businessmen who have destroyed our economy. Probably, they will return to Segunda División soon but, until then, the flag of the working-class will travel all around Spain, showing the pride of the humble people. Viva el Rayo Vallekano, joder! 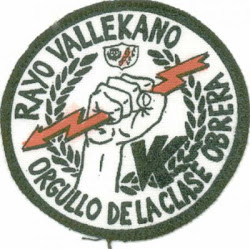