The 8-2 defeat of Arsène Wenger's Arsenal in Old Trafford is one of these historical results which have consequences and, probably, the most evident is the death of a football project.  Arsène Wenger has taken Arsenal to glorious moments during the past 16 years and the Gunners got prestige and admiration, but the decisions taken in the last years started to act like a slow death poison. Until August 28th 2011, a date that will not be easy to forget for the football fans. The day Old Trafford was The Theater of Nightmares for Arsenal, the day of no return.

When Arsène Wenger got Arsenal's head coach position back in September 1996, he was an unknown coach in England and Europe in general. He did not have an easy task in front of him, since he had to put some order in a club that was living in instability after the George Graham years and the interregnum of Bruce Rioch. After a very good debut season (1996-1997), taking Arsenal to the third position, only missing the UEFA Champions League spots for goal difference, Wenger added players like the French Nicolas Anelka and Emmanuel Petit, as well as the Dutch winger Marc Overmars, who joined the also young midfielder Patrick Vieira, who had signed the previous summer, and the "old guard" of Arsenal formed by players like Ian Wright, Adams, Dixon, Winterburn, Keown and Bould.

In this 2nd season (1997-1998), Arsenal overcame a 12 point gap to win the Premier League 2 weeks before the end. The Gunners also won the FA Cup this season defeating Newscastle in Wembley. In his second year, Wenger became the first foreign coach to win the English league and gave Arsenal their second double in history.

Despite the signings of Ljunberg in 1998, Thierry Henry in 1999 and Robert Pires and Wiltord a year later, Arsenal could not repeat these successful moments during a 3 year period, despite they were close several times. In the 1998-1999 season, Arsenal topped the league during certain moments of the season, but ended up losing it by a single point against Manchester United, who completed their historical Treble. The following 2 Premier League seasons only had an owner, Manchester United, but Arsenal still were their main rival in the competition. During this period, Arsenal's main failures happened in the UEFA Champions League, where the Gunners failed to perform. But these failures were balanced by an UEFA Cup final in the year 2000, lost against Galatasaray in the penalties, and a FA Cup final in 2001, lost against Liverpool. Arsenal failed to win titles, but the project was growing and the future looked brilliant.

The 2001-2002 season was historical. Arsène Wenger's project reached its peak. Despite the departure of important players like Anelka, Petit or Overmars, who had been essential in the Double of 1998, the squad found the solidness Wenger had been working on for years. Thierry Henry finally adapted to become a striker that was going to mark an era and players like Pires or Ljunberg reached their best moments of their careers. Sol Campbell also joined Arsenal in a very polemic signing, since he was a symbol of their eternal rivals, Tottenham Hotspurs. Arsenal broke a tight run for the title with a 13 game winning-streak to open a definitive 7 point gap on the runner-ups Liverpool. But it was not enough, Arsenal also won their 8th FA Cup, defeating  Chelsea to win another Double.

The following year (2002-2003), Arsenal seemed to be able to retain the Premiership crown, but the team ended up losing an 8 point gap to give Manchester United the title. Despite this disappointing defeat, the triumph in the FA Cup against Southampton, winning this title for 2nd time in a row, something that had not happened in 20 years.

The 2003-2004 season will always be recalled as the year of "The Invincibles". Arsenal won the Premier League without a single loss in the entire season, something that only Preston North End had achieved in the 1888-1889... in a very different era of football. In the summer of 2002, Arsène Wenger had announced that his team was able to do it. He just missed his prediction one year.

In the 2004-2005 season, Arsenal was unable to retain the title, which was won by a record-breaking Chelsea, managed by Jose Mourinho, but they could extend their unbeaten run up to 49 games, an all time English league record, which will be there to be beaten for decades. Consolation again happened in the FA Cup final, where Arsenal defeated Manchester United in the penalties. At this point, no one would have thought this title would be the last crown for Wenger in Arsenal. 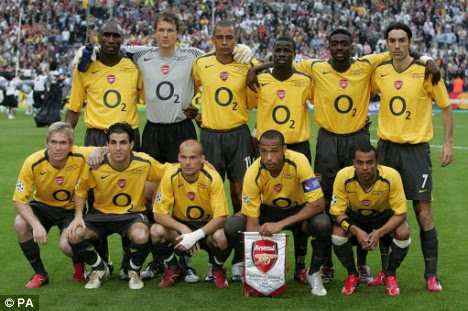 Probably symbolic, but a turning point was the transfer of Patrick Vieira to Juventus in the summer 2005. Wenger had succeed at retaining the stars of the team until this point. Offers from big clubs of England and Europe were a constant every summer, attracted by the great talent of the Gunners. Wenger finally opened the door to Vieira, knowing that the promising Cesc was ready to fill the space left by the French icon. The domestic season was poor though, since Arsenal failed to challenge for any title, putting all the efforts in the UEFA Champions League. Definitely, Europe was an obsession for this team, since the Gunners had failed to show in Europe what they had done in England. Arsenal did a great campaign in the Champions League, but was defeated by Ronaldinho's Barcelona in Paris. With players like Henry, Pires or Ljunberg reaching their veteran years, the missed chance was painful for a team that had made history for Arsenal.

The 2006-2007 season was transitional, the first one at the Emirates. Very important players like Ashley Cole, Sol Campbell, Robert Pires, Lauren and Ljunberg left the club. Wenger was able to convince Thierry Henry to stay, but the injuries and the start of his decline did not allow the idol and captain to shine as he had done until then. Henry moved to Barcelona in 2007 and the season was poor.

Wenger had put all the faith in a new generation of players to return to the good old days. Wenger refused to compete in the market and focused all the efforts in bringing young talents and promote players from Arsenal's youth teams. The idea was to emulate the success of his arrival, when he was able to raise young talents to form a historical team. But Wenger failed to emulate the results. Why?

It is always difficult to find a particular reason. During the last years, Arsenal has been a brilliant team, with a very attacking minded and entertaining philosophy. The team always managed to start the season showing a good level of football, but failed to compete in the key moments of the season. These young squads collapsed in the last part of the season, when the titles are decided. During this period, the Gunners have been waiting for this young team to peak, but it has been impossible.

It was impossible because Arsenal has been unable to retain their talent. Players like Flamini, Hleb, Adebayor or Touré left the club when they were reaching the peak moment of their careers, the age of a player to become important. Wenger has been unable to replace these players properly. Unlike the first part of the last decade, when Wenger was able to keep the core of the team, the important players were leaving the club. Sometimes these players left the club looking for better contracts and faster success. In other cases, Arsenal agreed the transfers. Arsenal has not reinvested in established players, aside the cases of Arshavin or Rosicky, who had failed to meet with the expectations raised on them.

In one way or another, Arsenal fell in a vicious circle. The Gunners have been waiting for the team to grow up, but the transfers made it impossible. The team always was too young and unexperienced to compete for higher goals. The very few additions in the market were also very young talents, like Nasri, or players of a certain level, like the mentioned Arshavin or Rosicky, who still are too far to make people forget the glorious team of the early 2000s. This "eternal" young and promising team have been able to perform good seasons, but has never been considered mature enough to fight for big titles. Probably, these good seasons despite the departures have made the club fall in self-complacency, because the "near future" was always promising. The "next season" was always the goal to reach, but the seasons pass and Arsenal was where they were in the year 2007... only 4 years later.

This feeling ended up entering in the locker room. The stars of the team, the players who were supposed to lead Arsenal in the years to follow feel that they can not wait for the whole squad to grow, especially if the talent keeps leaving the club. This summer Cesc Fàbregas and Nasri could not wait anymore and did not listen to Wenger anymore, leaving Arsenal to join present projects like Barcelona's or Manchester City's. Cesc and Nasri just did what Touré, Adebayor, Flamini or Hleb had done before.

The 8-2 does not explain the difference between Manchester United and Arsenal. The young Arsenal is not such a bad team, but this result shows that it is a team that has totally lost their confidence in Wenger. At this point, no one in the team believes in his manager to build a team. The so-wished "near future" looks too far... or out of reach. When the players of Arsenal stepped on the grass of Old Trafford, they felt clearly inferior, since the very first moment. The few veterans did not have the personality to carry with the youth on their shoulders and the young players were terrified, feeling like toys in the hands of an adult team like Manchester United. The 8-2 can only be explained in one way: the players of Arsenal do not trust Wenger anymore.

At this point, I do not know if Wenger will be sacked soon or if he will finish the season. I do not even know if this project can go further. But, in my opinion, Arsenal is closed in a vicious circle of an eternal unreachable promise, where no one sees an escape. Wenger has probably been too stubborn in his methods, which were successful while he was able to mix his great eye for young talent with the required experience. But the current team seems a caricature of the initial idea of Wenger when he joined Arsenal. In his favor, his good taste for football, his will to entertain the fans beyond the pure results. But the project is dead and Arsenal needs a shake. Arsenal's history is big before Wenger and will be big after him, just as it was with him. Wenger is a zombie and his team are walking dead players. It may happen tomorrow or in one year, but the game is over for the French coach. August 28th 2011 is the day Arsène Wenger's project collapsed.
Posted by Juan A. Gisbert at 1:58 AM