You did not need to be a genius to realize that Thiago Alcántara is the player of La Masia with more potential, at least in the short term. He had been amazing everyone since he joined the youth system of Barcelona and it was evident that the kid had all the talent to triumph in football if he kept everything else in the right direction. Aside the talent, Thiago seems to have an infinite ambition. Last year, he started the season with Barcelona Atlètic in Segunda División, but his football was too good for the cathegory and the club was "forced" to make him part of the first team during the season, automatically activating a clause to raise his buyout price in order to avoid surprises, since he already was in the agenda of half Europe. The same ambition that betrayed him when he said that he wanted to triumph in football, not necessarily in Barcelona. Words that forced him to apologize fast... but also the kind of words that made people doubt about his head, since he would not be the first player to lose track in the progression for thinking too high too soon.

At the end of last season, Pep Guardiola set the objectives for this summer and, once again, Cesc Fàbregas was in the list. Many people made a logical interpretation: Xavi is already 31 and will be 32 early next year and, last year, the injuries were hauting him. Despite he did not show signs of decline, it is evident that he will have to start to save efforts pretty soon. Andrés Iniesta is in the peak moment of his career and is Xavi's perfect partner. But then, there was a gap between the fantastic duo and Thiago Alcántara. No one had doubts about his talent, but it was normal to have doubts about the capacity of such a young player to drive the most exigent midfield of the World so soon. Thiago was good, very good, but too young to be compared with the 2 best midfienders of the last years. And this is why, the logical reasoning asked for Cesc, a player with La Masia DNA, experience and leadership skills. It would be perfect for Barcelona and for Thiago's development. 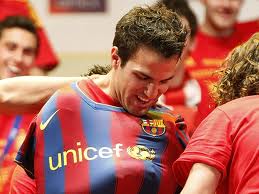 Before the U-21 Euro, Luis Milla, the Spanish NT's coach and someone who knows Johan Cruyff's psychological methods too well said about Thiago: "If Thiago wants to be like Xavi or Cesc, he needs to be humble". A kind of attack on his star, which suggested that Thiago still had a lot to learn, trying to cool all the hype about him. Thiago responded with a magnificent tournament driving Spain to the victory, showing great football. Later on, Thiago joined Barcelona's pre-season and, if there is a name that is shining above the rest is Thiago Alcántara's.

Cesc is not in Barcelona yet and, once more, Thiago is going very fast, jumping stages in his career. With the signing of Cesc to be decided, Thiago is making people have doubts about the necessity of the player of Arsenal, considering the huge amount of money Arsenal is asking for. The debate is in the streets, is Cesc necessary having Thiago in the pocket? When at the end of May, most of the barcelonisme was convinced about Cesc, now things are not that obvious and there is an important sector that defends to give the #4 to Thiago Alcántara... the guy is prepared for it.

There are 2 possible scenarios: If Cesc joins Barcelona, will it be a problem for Thiago? Barcelona would gather 4 fantastic players for 2 or 3 positions (Iniesta can still be a fake winger) and Pep Guardiola would have to drive the situation very well, since it is hard to keep 4 players of very high level happy, if they do not enjoy all the minutes they want. In that situation, it is likely that Thiago would be the one enjoying less minutes and the club already knows the hot mouth of the Spanish-Brazilian player.

The 2nd possible scenario is Cesc staying in London. Then the question that arises is: Is Thiago prepared for the big games? One thing is to shine in pre-season games and a different one is to do it in the important matches of the official season. Xavi and Iniesta had to work and fight a lot to be where they are. In that sense, as much as Thiago is impressive, he also needs to keep in mind that things are not always that easy and sometimes you need to clash against the floor to get up stronger. It is not stupid to think that Thiago still has a lot to learn and do to compare his career with Xavi's and Iniesta's ones... even with Cesc's.

At this point, probably, Thiago is going faster than Pep Guardiola would have thought at the end of May and two possible scenarios seem to open long debates in Can Barça. Guardiola definitely has a problem and he will have to find a solution... but blessed problem!
Posted by Juan A. Gisbert at 10:13 PM