Why Xavi should be the #1

Yesterday, UEFA announced the 3 nominees for their Best Player in Europe Award: Lionel Messi, Cristiano Ronaldo and Xavi Hernández, and the winner will be crowned in the UEFA Gala at the end of August, as always, in Montecarlo. Some months ago, UEFA said that "the new accolade will recognise the best player, irrespective of his nationality, playing for a football club within the territory of a UEFA member association during the previous season. For the inaugural award, players will be judged by their performances during the 2010-2011 campaing in all the competitions, both domestic and international, and at club and national team levels". The jury is formed by 53 journalists, members of the European Sports Media (EMS). Basically, this award is an answer to the FIFA World Player after they merged with France Football's Ballon D'Or and, somehow, wants to fill the space left by the award of the French magazine.

Aside the 3 nominees, UEFA announced the top-10 and there is a fact to highlight: aside Xavi and Messi, FC Barcelona have 2 other players in the top-10, Gerard Piqué and Andrés Iniesta, who was 4th in the votes. So, according to these results, 3 of the 4 best players in Europe play in Pep Guardiola's and the Spanish NT teams. These results do not differ much from the last FIFA World Player Award, which suggests some consensus about the domination of the mentioned teams in their respective tournaments.

Out of the pure facts, I must admit that I am not a big fan of these individual awards. In fact, I believe they are unfair and somehow silly, since I believe football is a collective game, a team game, where the synergies are more important than the pure sum of individuals. Of course, individual talent is important, but it only excels when the collective functioning works as a perfect machine, where the connections, the associations, the flow of a system allows the players to express their natural talent inside the rules and discipline of a system.

Is Xavi better than Messi and Ronaldo? First of all, I believe it is not possible to compare. Lionel Messi and Cristiano Ronaldo probably represent the image of football, they are the best commercial of the game, outstanding players who make the difference when and where it matters. Both are a joy to watch, each one in their own style. No one is going to discover their talent at this point and, of course, if they win any personal award, I would have nothing to say about it. Xavi is not in charge of the electric chair as the other two, his style is more subtle, or just different, impossible to compare.

So why Xavi? Despite I know that these awards are a recognition for the contribution of a particular player in a particular season, I also believe that it is necessary to take some distance and analyze the overall moment. It is evident that Xavi can not compete with the other 2 in terms of goals, highlights or these particular moments that, at the end, are the aspects which make this game be different and attractive. On the other hand, before the goals and the highlights, there is a team, in FC Barcelona, Real Madrid or any other team you can think about. A team that, with their collective performance allows the executioners to excel in what they do.

Looking at the last years, the most successful club has been FC Barcelona. A success based on a certain and maybe unique style of football, which has attracted the attention of the World. At the same time, the Spanish NT won the Euro 2008 and the World Cup 2010, with a different system, but the same idea of football. Basically, we are talking about the most successful teams of their era, in the club and international level respectively. All these teams have something in common: Xavi Hernández. 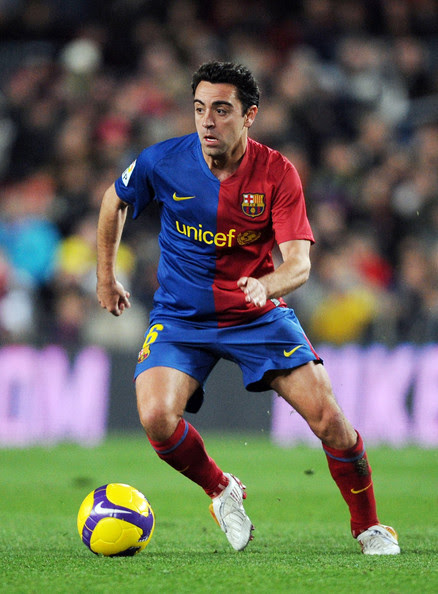 History will say that, in this era of football, there was a dominant style and, in my opinion, the icon of the style is Xavi. The Catalan player is the engine, the brain and the soul of the teams he plays in. Xavi and his way to view football define the idea of his teams: Barcelona and the Spanish NT. Without Xavi, it would be impossible to understand the success of the dominant teams of this era. Pep Guardiola is not Luis Aragonés and none of them is Vicente Del Bosque and vice versa. The system changes, the mechanisms are different, but the philosophy is the same and the whole idea is built around Xavi.

As extraordinary as they are, Lionel Messi and Cristiano Ronaldo do not define a style, they do not change the teams they are in. They are the best in what they do. They make the difference and they would do it anywhere they would go, but none of them have the influence to change the style. Put it this way, Barcelona and Spain would not be what they are without Xavi. They might be as good as they are nowadays, they might win everything too, but they would be different. Xavi is the key of the idea, everything flows around him, the teams where he plays in build their overall mechanisms and automatic movements around the game of Xavi. If intelligent and patient ball possession is successful, it is because there is a player called Xavi, who reads the game as no one else does nowadays, always choosing the best option, giving the ball backwards instead of losing it or risking an impossible pass, accelerating the pace of the game with a killing assist that breaks 2 defensive lines, but always with an idea in mind: "if the ball is yours, the rival does not have it", which is an idea that breaks the supposed defense and attack border to become an overall idea of football. If the ball is yours, you can score the goals you need... and if the ball is yours, the rival does not have the ball they need to score a goal against you.

Maybe these awards will never recognize the individual achievement of this player, but I believe history will put this Barcelona and this Spanish NT in their right place and Xavi will always be recalled as the architect of their idea of football. I do not believe in personal awards, but I believe in recognition where its due. This is why I believe Xavi should be the #1.