When the ball rolls, the Sheikh should be Manuel Pellegrini

In June 2010, the Sheikh Abdullah bin Nasser bin Abdullah Al Ahmed Al Thani came from Qatar to Málaga to buy the club of the city from Lorenzo Sanz for 36M euros. At that moment, not many people knew him and the arrival of the Sheikh Abdullah made the local fans swim between skepticism and illusion. The Qatari Sheikh did not have much time to start his first project, which was put in the hands of Jesualdo Ferreira, successful former Porto coach, who was unable to put the team in the right direction in a mix of incompetence and the lack of good players. The new rich Málaga was flirting with relegation positions and, in November, the Sheikh finally decided to give the step forward the club needed. 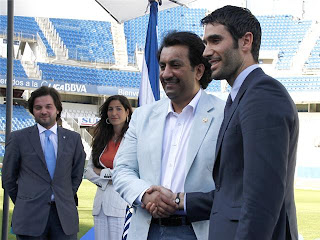 Fernando Sanz, ex-president and the Sheikh's assistant, recommended the signing of Manuel Pellegrini, who was unemployed since the moment he was fired from Real Madrid by Florentino Pérez. At the same time, the club made important investments in the Winter market, signing experienced players like Enzo Maresca, Martín Demichelis and Julio Baptista and young talent like Ignacio Camacho or Sergio Asenjo (on loan). The face of the team had a radical change and found the regularity they needed to save the season.

This summer the Sheikh Abdullah has decided that he wants to put Málaga in the top positions of La Liga and, in order to do it, he did not hesitate to invest whatever it takes to change the horizon of the club. At this point of the season, Málaga spent more money in signings than Real Madrid and Barcelona. Everything started with the arrival of Pichichi Ruud Van Nistelrooy for free. Well, not impressive, no one denies the quality of the Dutch striker, but it is not that he is in the peak of his career. The signing had the effect they probably expected though and 10,000 people went to the presentation of the player and the selling of ticket season started to work well. The 2nd one was Ignacio Monreal, Osasuna's full back for 6M, international player and one of the best in his position. The next to come were Jerémy Toulalan from Lyon for 10M, Joris Mathijsen from Hamburg for 1M, Diego Buonanotte from the relegated River and Sergio Sanchez from Sevilla. Every single presentation was a party in Málaga, with thousands of people in the stands of La Rosaleda to welcome their new idols. The state of euphoria was declared... and the Sheikh announced that the best was yet to come. 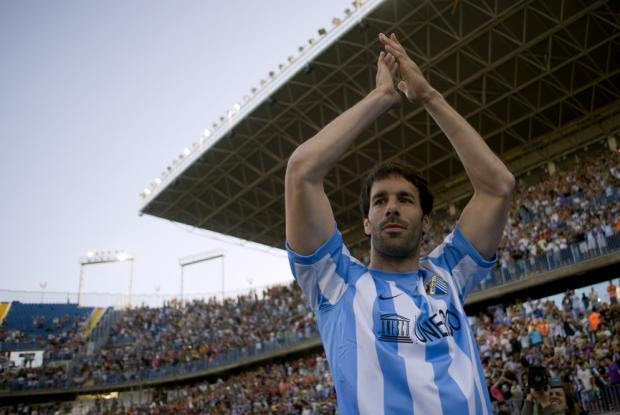 And they did not hesitate to pay the 6M buyout clause of Isco, the best prospect of Valencia's youth system, which was an earthquake in the Ché club. But Málaga had not stopped fishing in Valencia and they also brough Joaquín Sánchez, the veteran winger who seems to keep his old prestige... 15,000 were in his presentation. But if there is a player who definitely attracts the attention of everyone is Santi Cazorla, one of the best midfielders of La Liga, signed from the Champions League Villarreal for 20M euros, giving him a star contract of 3M euros per year.

For now, it's just a description of facts. But the season starts in a couple of weeks and I always had doubts about this kind of projects. For now it's a bubble of names. All of them sound good. Some of them are in the decline of their careers, like Van Nistelrooy or Joaquín, but overall the club seems to have the right names to do an important season. In that sense, the exigences are going to be high. But this is not always that easy, since it always takes time to adapt and learn the mechanism of a system and a idea. Lots of new faces and not much time, since everyone will ask for good results since the very first day in a team that is not used to fight for important goals. Europe is a must and, given the level of investment, the Champions League should be the objective in a near future... if not this season, the next. It would not be the first time that a huge project like this one fall, so it is important to keep the feet on the ground and be patient.

In my opinion, the key of the project is not the big names, but Manuel Pellegrini. The Engineer is a good coach with high prestige in Spain, a man who knows La Liga and the job, coherent and humble in his work. In Villarreal, Fernando Roig gave him time and stability and we all recall the semifinals of the Champions League of 2006, when the Yellow Sumbarine were a penalty away from the final of Paris. I am skeptical about the results in the short term. As I said, big names do not assure success. Yes, they are important, but it is also essential to set a solid ground to grow from. Manuel Pellegrini is the right man to do it, but we still do not know how the Sheikh and the fans will react if the results are not as good as they expect in the first games.

We must keep in mind that the rivals of Málaga have solid and long term projects, like the ones of Valencia, Villarreal or Athletic, or teams that are used to be in top positions, like Sevilla or Atlético. It is not going to be that easy. The Sheikh must be patient, the fans must remember where they come from. If they do it, I will start to believe in it. But if they get blind for the money they spent, the whole project may end up being a boomerang that slaps them in the face. The Sheikh did what he had to do, but now he must give a step backwards and let Pellegrini work, with time, without pressure... in that case, I will be a believer too. For now, I declare myself skeptical.
Posted by Juan A. Gisbert at 1:09 PM