"The top of my teams always came in the second season" (link in Spanish). It was August 2010, José Mourinho had just started his first pre-season with Real Madrid, after winning the UEFA Champions League with Inter against Bayern in the Santiago Bernabéu. At that time, the madridismo still felt relief after the defeat of Barcelona in the semifinals of the competition, when Inter denied the "obsession" of the barcelonisme, and the arrival of the prestigious Portuguese coach, so hated in Can Barça after the endless polemics during the last decade, was the one of a Messiah. Still Mourinho knew the size of the challenge he had in front of him and asked for patience. A well thought and rational message. After all, Real Madrid had been swallowing coaches and he knew that stability is necessary to build a serious project. As Mourinho said, the automatism and mechanism in a football team does not appear from one day to the next.

One year later, Real Madrid already won a title, the Copa del Rey, defeating Barcelona. In the overall analysis of the season, it is evident that the winner of the biggest rivalry of the World was Barcelona, after winning La Liga (including the historical 5-0 in a face to face) and the Champions League. In any case, this title was very sweet since it was against the main rival and it looked like a step forward in the good direction and many were ready to remember how Johan Cruyff saved his head in a Copa del Rey final in 1990 to win an European Cup and 4 Liga titles in a row. Real Madrid lost the war, but the feeling in the club of the capital of Spain is that they are closer and the best is yet to come. Mourinho promised them to have the winning team in the 2nd year.

And here we are. The second season is about to start. It is the time and the moment and Mourinho is a prisoner of his own words for the good and the bad. This time a Copa del Rey will not be enough, so La Liga and/or the Champions League is a necessity. If Mourinho is able to do it, he will be raised to the heavens. A man of word. But if not, everything will turn against him.

Last year, La Liga lived moments of tension that did not have any precedent. José Mourinho declared the war in every single level. As himself declared, the games start in the conference press and he did it. He knew how the state of tension made Barcelona face the semifinals against Inter from a passionate point of view instead of focusing in football. Mourinho's strategy was to create a total state of tension since the very first day. Every tool in his hand was a weapon of massive destruction. One day it was a lineup of Manuel Preciado (Sporting's coach); the next day, the fixtures set by LFP; then, the referees; or the theatrics of the rivals. The most radical sector of the pro-madridista media did not hesitate to act as megaphone or even directly in the attacks, as the day the conservative radio station COPE claimed that official Real Madrid sources were going to ask the RFEF (Spanish FA) to start more serious anti-doping controls and somehow the names of Valencia and, especially, Barcelona were suggested. Both clubs made official communications and asked for a fast and evident rectification, the radio station apologized since they could not show any evidence, but they still claimed that the news were real. Despite the name of Real Madrid was involved as accusing part in the news, the club did not make any public communication and the only reply was a heavy silence. The run of Clásicos at the end of the season only left more corpses on the field and even the consequences of these games in the personal relationships of the players who share locker room in the Spanish NT were feared.

We had a couple of months of peace, but everything is fresh in the memory of everyone. In a matter of two weeks, Barcelona and Real Madrid are going to clash in the Supercopa again. A minor trophy with a special interest. It is José Mourinho's first chance to finish with the domination of Barcelona. A minor battle that will never be determinant to decide the winner of the season, but Mourinho knows that the title would help him and his players to trust in the "2nd year" message. In Barcelona, it is also known that it will be good for them to create doubts in the still solid message of the Portuguese coach. 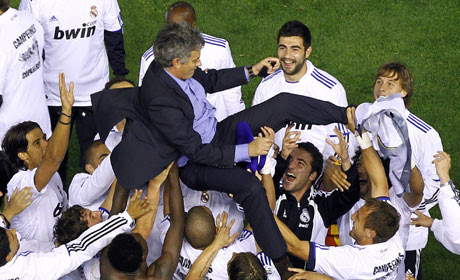 The season about to start is going to be definitive for Mourinho. He is the prisoner of his own words and this time the absurd polemics will not make sense unless they are backed with important titles. I find hard to believe that the Bernabéu could actually tolerate another year of total war, if Mourinho is not able to take them to Cibeles to celebrate important titles.

Mourinho does not seem to hide behind noise. He has all the players he wanted (Agüero or Neymar fit in Florentino's style, but they are not essential in his project, as he has declared), the most expensive team in history. He has the total control of the club, being able to erase Jorge Valdano from the structure, becoming the only owner of the whole scenario. What is normal in England, it is a rarity in Spain and, especially, in Florentino Pérez's Real Madrid. If someone with the power and ego of the president of Real Madrid has been able to give the club to José Mourinho, the only possible interpretation is that the Portguese coach is the only bet. Florentino Pérez has put his own future in the hands of the coach.

"End of cycle" is the motto. Real Madrid have a super-team this year. If last year they were amazing, the depth of the current squad is unseen. It is hard to believe that Mourinho will change his style. Another year of tension is to come, but this time the noise must be useful or Mourinho will be the first victim of it. Now there is no disadvantage in terms of preparation and the noise will not hide any reality. Mourinho knows it. Everyone knows it. It is now or never for him... and for Florentino Pérez.
Posted by Juan A. Gisbert at 11:45 PM