The Spanish youth on sale

The poor economic and financial situation of Spain, in general, and in football, in particular, are opening possibilities of business to vultures in search of opportunities. Since one month ago, an investment fund called Doyen Group (do not look for it in google, you will find absolutely nothing) has been reaching supposed sponsorship agreements with some clubs of Primera División, like Sporting, Getafe and Atlético Madrid, that seems to be extended to other clubs, like Espanyol or Sevilla in Primera División and Deportivo in Segunda, who also signed agreements with them. For now, these agreements are made for figures that go from 100,000 to 150,000 euros.

Some sources claim that Doyen Group is an English fund with Portuguese capital, some other sources suggest that the Russian money is behind this strange fund. But what is the reality of this investment fund? It is evident that the intentions of Doyen Group go beyond the simple sponsorship agreement, after all they are not willing to sell or promote any product, service or event. Today, the Spanish newspaper El País explains the intentions of this fund.

This fund wants to invest in the ownership of the rights of young talents. As it is well known, the South American market of young players is saturated of investment funds, scouts and agents, especially in the main "factories" of talent, Brazil and Argentina. But the success of Spain in football, not only in the first team of the national team, but also in the youth levels (Spain won the U-21 and U-19 Euro tournaments last summer, as no one else has achieved previously) has caught the attention of this fund. In recent times, Doyen Group has been scouting and analyzing the youth academies of several Spanish clubs and, convinced by the magnificent health and methods, has decided to invest in players, all of them under 24, who have potential to increase their market value in mid or short term. 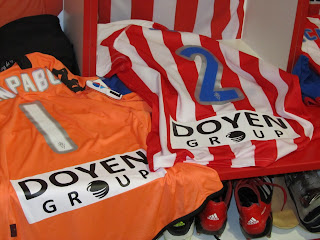 Doyen Group offers different possibilities in their offers and this flexibility seems convincing for several clubs who are needed of money in these times of crisis. The fund's offer for the "important" clubs is to give them the chance to count on established players who are out of reach for these clubs, given their poor financial state. At the same time, the more humble clubs are getting offers for the total ownership of their best young players with the chance to count on them until a transfer to a bigger club makes possible to make the business profitable for the fund, real owner of the rights of the player. In both cases, the percentage of participation in the ownership of the rights are open to negotiation. The fund also gives these clubs the chance to act like platforms, mainly in international movements. The fund loans them a player for a certain time in order to give the "asset" the possibility to show his talent in La Liga and raise his value for future transfers.

For now, the clubs only admit sponsorship agreements, like Sporting, who already made an official statement on this defending the solvency of this fund, although admitting that this deal could be extended... without more explanations. Atlético Madrid, who also wear the name of the group in the sleeves of their shirt, has made official this agreement, which would also affect the rights on the elite boxes and the static banners of the stadium.

What Doyen Group proposes is what is called the "Third Party Ownership". A legal formula that is accepted in countries like Turkey, Portugal or Spain (although it has never been used in the Spanish clubs), but forbidden in the Bundesliga or the English Premier League since 2007. The Spanish clubs see this agreement as a solution for these times of drought. But this is what we could label as "bread for today, hunger for tomorrow". As we claimed in previous occasions, the Spanish football needs to be reviewed from top to bottom. The league with the clubs with the most important international achievements must look for solutions that avoid the mortgage on its assets. What Doyen Group propose is to make La Liga a feeder league for richer European clubs. Even though it is true that these clubs are in truly need to find funds for today, they must never forget the future. To put the youth academies in the hands of this kind of funds only serves to anticipate future incomes, but it is unlikely that this anticipation makes the investment on youth academies more profitable in the long term.

As a consequence of these agreements, we would see several Primera División clubs acting as mere platforms or feeder clubs for the giants of football, going in the opposite direction of where they are supposed to go. A policy that would only make the gap between "big" and "humble" clubs bigger and bigger and, what it is even worse, cutting the connection of the club and its community, represented in the local talents, the most loved and respected players by the fans.

The economic and financial problems of the clubs are serious, there is not doubts about it. But these times of crisis also require long term perspective. There are several ways to face this situation and La Liga, represented by the Liga de Fúbtol Profesional (LFP), must decide: do we want a top league or do we want to feed the Premiership and the Bundesliga with our best talents? Lion or mouse? It is sad to see that the Spanish youth is on sale. Seriously, where are we going?
Posted by Juan A. Gisbert at 10:21 PM