Levante UD, the pride of the outclassed

Valencia is located in the East coast of Spain, but it always was a city that gave its back to the sea. Valencia's comarca is called L'Horta, which means "market garden" or "fruit belt". This name reflects the reality of the city whose main industry was the agriculture in the fertile fields around the city. As a consequence of it, the market, the cathedral, the city council and the rest of important buildings and facilities were placed far from the sea. The agriculture gave the city most of the employments and the wealthy families were those who own lands. On the other hand, the fields that were located near the sea, which had less value due to the salt of the Mediterranean sea, was occupied for fishermen, a less wealthy class. These fishermen neighborhoods, located in the suburbs of the city, near the coast, are Cabanyal and Malvarrosa, initially independent towns and part of the city, as a consequence of the expansion during the 20th century.

These fishermen neighborhoods, given their traditional independence, have their own personality and are the natural zone of influence of Levante UD, a club that appeared as a consequence of the union of FC Levante (previously Cabanyal FC) and Gimnástica (previously Universitario FC). On the other hand, Valencia FC (now Valencia CF) was founded in the centrical and historical zone of the city, in the bourgeoisie's natural zone, in the heart of the economic and political power of the city. These differences were essential in the early years of both clubs, since Valencia CF gathered the appreciation of the powers which provided them easier ways to fund the club and their centrality in the city gave them a bigger exposure. However, Levante was the club of the fishermen suburbs, the outclassed.


As a consequence of the bigger economic power of Valencia CF, the club was able to reach higher achievements in its history and, as a result, they were also able to gather the support of the majority of the city, the province and part of the region. On the other hand, being a Levante UD fan was a matter of pride. The pride of the forgotten areas near the sea.

Nowadays, both clubs struggle economically, but there is an important difference. The crisis of Valencia is solved with the transfer of super-stars and a big dose of patience, but still keeping their elite status in the Spanish football. However, Levante UD belong to the extensive humble class of the Spanish football. The club has been under administration during the last decade, until their young and talented president Quico Catalán has been able to impose a rational economic structure while building a team with players that are in the last part of their careers, but still willing to show something.

This perfect mix of experience and pride is giving its goods. Levante UD, the club with the lowest budget in Primera División, was able to keep their position in the cathegory last year. In this new season, if you look at the standings, you see the powerful FC Barcelona on top... sharing points with Levante UD, who are placed over Valencia CF in the standings in a historical event. It is just an anecdote. It is evident that it is a matter of time that Levante UD disappear from the top positions, but whenever they do it, they will already have a good collection of points that will probably be very important to reach their real goal: their permanence in Primera División. 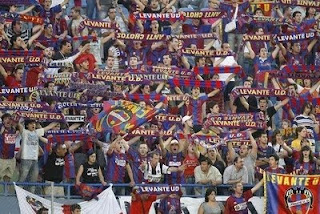 For now, this club of outclassed live in a dream. A historical victory on Mourinho's Real Madrid and a special  privileged position in the top of La Liga after seven weeks of football are something that will be recalled in Malvarrosa and Cabanyal, these mistreated and forgotten neighborhoods of the coast. One day, they will wake up, but no one will ever make them forget the days they owned the city and shared La Liga with the historical Guardiola's Barcelona.
Posted by Juan A. Gisbert at 8:52 PM