Back in 1947, when the Nuevo Chamartín (nowadays, called Estadio Santiago Bernabéu) opened its doors for the first time, Real Madrid was already a powerful club, but not the club with more titles. Real Madrid had achieved 2 Ligas in the times of the II República in the 1930s and 8 Copas, while Athletic has won 5 Ligas and 17 Copas, being the most important club until this date. The importance of the Nuevo Chamartín in the future victories and current status of Real Madrid is enormous and everything was a dream of their legendary and visionary president Santiago Bernabéu.

Santiago Bernabéu was born in Almansa (Albacete) in 1895 and grew up in a middle-class family. Being five years old, his family moved to Madrid. His first team was Real Gimnástica de Madrid, an already disappeared football club of the capital of Spain, where he started to play as forward, but he moved to Madrid CF (without the Real title yet) soon, the team of his brother Antonio, one of the founder members of the club. After three years in the youth system, he made his debut in the first team in 1913, being 18 years old. Santiago Bernabéu played for Real Madrid until 1927, scoring 69 goals in 78 games.

After his retirement, Santiago Bernabéu started to study law, but he never worked as lawyer, since he preferred to work in different positions inside the club, starting as part of the technical staff to end up as Secretary of the Board of the club from 1929 to 1935, when he resigned for his opposition to the new president Rafael Sánchez Guerra, although he stayed as member of the Board. Since the times of the II República, Santiago Bernabéu had shown his political sympathies for the conservative right-wing party (CEDA) and, whent the Civil War started, he looked for shelter in the French Embassy for his sympathies for the rebels led by Franco in a still democratic republican Madrid. Bernabéu went to exile, but in the last years of the Spanish Civil War he joined the army of the General Franco in the front of Catalonia. After the war, he got a job in the tax administration and recovered his place in the Board of Real Madrid. On September 15th, 1943, Santiago Bernabéu was named the 21st president of the club.

Real Madrid had been playing in a stadium with a capacity for 15,000 fans located in the lands of Chamartin de la Rosa since 1924, back then an independent village (now a district) in the north of Madrid. But the massive development of football in Spain during the following decades and the poor state of the facilities after the Civil War (the stadium was used to classify prisoners) made Santiago Bernabéu propose a new stadium as main column of his new project.

Back in 1934, Santiago Bernabéu visualized the Paseo de la Castellana (one of the main avenues which connects the historical downtown with the north of the city) as a main artery of the future Madrid and expressed his worries about the future of the old stadium of Chamartín, which was going to get suffocated in the future development of the city. In 1943, in his first speech, the president Bernabéu stated: "Sirs, we need a bigger stadium and we are going to do it". Only one year later, the club bought the lands for 3 million pesetas (18,000 euros of those times), which were located next to the old stadium of Chamartín, and opened a contest of projects that was won by Manuel Muñoz and Luis Alemany, who proposed a stadium with a capacity for more than 100,000 fans.

The construction was not easy, the project was labeled as mammoth and it was very difficult to find financial help to fund the building projects. Finally, the Banco Mercantil e Industrial gave Bernabéu the loan they needed to start the construction of the stadium in April 1945. But the club also had to overcome other problems, like the lack of concrete and steel or even seeds for the grass. Finally, when the construction of the first phased of the stadium, the Nuevo Chamartín opened the doors in December 1947 in a friendly game against Os Beleneses. In those days, the facility counted on a capacity for 75,145 fans, 27,645 of them enjoyed seats (7,125 covered) and 47,500 standing (2,000 covered).

Back in 1947, the Nuevo Chamartín was a unique stadium in Spain compared with other stadiums. Les Corts, the home of FC Barcelona was a big but old stadium that had reached its limits in 60,000 locations in 1943, and San Mamés (Athletic) could surpass the 50,000 locations after the renewal finished in 1952. The new home of Real Madrid was modern and its design allowed future renewals to increase its capacity.

In the following years, the club started the 2nd phase of the stadium, which was already used by the team. In June 1954, the club finished the construction of the stadium, which had a capacity for 125,000 fans (7,149 seats covered; 24,079 seats non covered; 19,000 covered stands and 74,772 uncovered stands). At that point, the Nuevo Chamartín was the biggest in Europe and the innovations in architecture (like the "Y" form of the beams) were remarkable.

In 1955, the Assembly of Socios (membership) gave a new name (the current name) to the stadium: Estadio Santiago Bernabéu. Since the end of the construction of the stadium, Real Madrid started their dominance in Spain, winning 18 Ligas and 6 European Cups in the following 25 years, until the death of Santiago Bernabéu. These figures showed how important was this stadium in the success of Real Madrid in the second part of the 20th century. 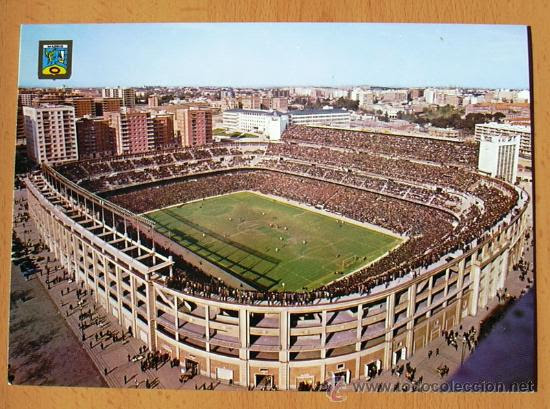 In the following decades, the stadium did not change much. Probably, the most remarkable event was the illumination, which started to work in 1957, allowing to play games at night. During the 50s and the following decades, the Santiago Bernabéu stadium hosted the European Cup of Nations in 1964, 3 European Cup finals (1957, 1969 and 1980) and an endless list of Copa finals.

The World Cup of 1982 in Spain was the reason of the next important changes in the stadium. Since 1954, the Santiago Bernabéu hardly suffered any change and the modern stadium of the 50s had been questioned in the previous years. The same president Santiago Bernabéu proposed the construction of a new stadium in the mid 70s, since the maintenance was very expensive given the lack of changes in the previous decades. The project found some legal problems that did not allow to go forward with the idea and, finally, in the early 80s, the club decided to adapt the stadium to the new times.

In its regulations, FIFA forced the World Cup final stadium to have seats in at least half its capacity and two thirds of the seats had to be covered. Because of this reason, a roof had to be built, covering the perimeter of the first and second ring, except the East lateral zone. The construction of the roof and the new seats reduced the capacity from 125,000 to 90,800 spectators. Other new aspects of the stadium were the renewal of the facade, the new electronic scoreboards in the north and south stands and the new press zones, locker-rooms, access and surroundings. The cost of the renewal was 704 millions (500 of them paid by Real Madrid).

In the mid 80s, UEFA set important safety norms after the tragedy of Heysel and the increase of hooliganism in the European football. The stadiums were forced to create independent access to different kind of locations inside the stadium and the installation of seats for all the capacity of the stadium. This meassures were going to reduced massively the capacity of the stadium, given the important amount of standing locations of the Bernabéu. The president Ramón Mendoza impulsed the increase of capacity, which started in 1992 and finished in 1994 and costed 5,000 million pesetas (30 million euros), which had an important impact in the economy of the club. The renewal consisted in the creation of a third ring in the West lateral tribune and the goal stands. 20,200 seats locations were created, with an 87 degree inclination to ensure the good vision. Four towers were also built to hold the new stands and the external height passed from 22 to 45 meters. The final capacity was 106,000, which were reduced to 74,328 seats when the president Lorenzo Sanz accomplished with the all seat UEFA rules.

Already in the early 2000s, in the first stage of the presidency of Florentino Pérez, the club announced the "Director Plan of the Estadio Santiago Bernabéu", which aimed to improve the comfort of the stadium, the quality of the facilities and to maximize the income generated by the stadium. 127 millions were invested to increase the capacity of the stadium and the posterior facade aside other minor renewals (locker rooms, VIP zones, restaurants, macro-store, etc.). The final and current capacity of the stadium is 80,354 all seated.

Yesterday, several newspapers leaked information about the renewal of the Estadio Santiago Bernabéu. According to these news, the president Florentino Pérez wants to propose to make the biggest renewal of the stadium since its construction. The renewal, which would need the approval of the Assembly of Socios and the City Council of Madrid, is very ambitious. Florentino Pérez plans to accomplish with his dream: the construction of a futuristic roof which would cover the whole stadium.

The project consists in the renewal of the facade of the main tribune, located in Paseo de la Castellana, in order to build facilities for a shopping mall with stores and restaurants, a parking and a hotel with suits that would allow its visitors to watch the game from the room. The whole stadium would be totally covered by a roof which would allow to install heating in all the stadium. According to these news, the architect would be the American Frank Ghery, the author of Bilbao's Guggenheim Museum. Florentino Pérez aims to increase the revenue of the stadium to 200 million euros per year.

This project would be the fulfillment of the dream Santiago Bernabéu once had in the early 40s. Back then, empty lands in the surroundings of the city, nowadays a stadium located in the financial and business center of the city. The Santiago Bernabéu stadium was a reference since its early days and the club is decided to continue with the tradition. A temple of football that saw the best players of the planet during the last 65 years. A stadium that never gets old. The madridistas will enjoy a "new" Bernabéu, keeping the tradition and the history of an eternal stadium.