La Liga just started and the best strikers of La Liga compete to win the Pichichi award, the top-scorer award given by the sport newspaper Marca. Cristiano Ronaldo, Leo Messi, Radamel Falcao, Fernando Llorente, Giuseppe Rossi, Roberto Soldado... all of them and some others will try to write their name in golden letters in the history of the Spanish football. Probably some of you already know that Pichichi was an Athletic's forward in the 1910s and the bust that is located in San Mamés since 1926, where every club in invited to leave a bunch of flowers in their first visit to La Catedral of the Spanish football. This is the story of Rafael Moreno Aranzadi, Pichichi.

Rafael Moreno was born in Bilbao, on May 23rd 1892, in the street Santa Maria, 10. His family belonged to the middle class of Bizkaia at the end of the 19th century and his father was a prominent lawyer and secretary of the City Hall of Bilbao. He was relative of the essayist, novelist, poet, playwrite and phylosopher Miguel De Unamuno, one of the most important figures of the literature of Spain of the last century and also a controversial political figure.

Rafael Moreno started to kick the ball in school, in Los Luises, against the team of the Escolapios school. When he grew up, he continued enjoying his hobby in the Campa de los Ingleses, where the current Guggenheim museum of Bilbao is located. All the legends about his nickname Pichichi appear during this time. Some stories tell us that it is just a derivative of pichón, pichín or pichinchu, which are just nicknames that are given to close people with a short height; others come up saying that it was an Athletic scout that paid attention on the unknown kid, writing down the nickname instead of the unknown real name of the boy in the report given to the club; others just defend that it was a way to call the kid of the famous runs in the wing: "There goes the Pichichi".

Rafael Moreno "Pichichi" started to play with Athletic in 1910, when he was 18 years old and was a student of the Deusto University. As player, he got to know three stadiums of Athletic in the early years of their history: Lamiako, Jolaseta (Neguri) and San Mamés. Since the very first day, he appeared as an exceptional football player and, in the first registered column about him, the journalist labelled him as the "King of the shoot". Soon, his teammate showed their admiration for the quality of this player. His cousin, the jesuit Alfonso Maria Moreno wrote the following definition of Rafael Moreno in his book Vivir no es fácil (Living it is not easy):

"My cousin Pichichi is the best Athletic player and the best Spanish player. Everyone says so. He has a tremendous shoot, down on the grass and always on target, impossible for the goal keeper to stop it. But above other aspects, he knows how to dribble as no one else and he is able to run from one goal to the other, with a crew behind him, not losing it, to score one goal after another. Great header, especially in corner kick actions. When Athletic is struggling, the crowd always expect one of the magic moments of Pichich to solve the situation and Mario Ugarte, Rolando and many others shout at him asking for an heroic record. The worst of all is that he sometimes is too individualist and sometimes this is his lost. Many English clubs want to take him there as professional, but he never wanted to leave Bilbao...".

Pichichi was the first player to score a goal in San Mamés, never forgotten in Bilbao. It was the opening day of the stadium, almost 100 years ago, in August 1913, against Racing Santander in a game that ended up with a 1-1 draw. 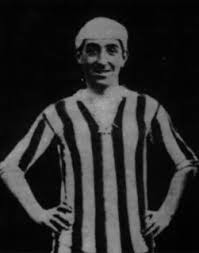 The fame of Pichichi broke the limits of sport and painters like Arrúe and, especially Arteta made his image stay forever as in the famous painting Idilios en los Camps de Sport (Idyll in the Sport Camps), where the forward was flirting with the young girl, Avelina Rodriguez, who ended up being his wife and mother of one
girl.


The Olympic Games at Antwerp in 1920 were he enjoyed his last minutes of glory in a career that already was in clear decadence, being Silver medal in the Games.

On May1921, Pichichi retired from football, being 29, and West Ham United was his last victim. He scored 78 goals in 89 appearances for Athletic in regional (Campeonato del Norte) or state tournament (Copa del Rey). But bad luck crossed his way. On February 1922 he ate oyster in bad conditions and ended up suffering from typhus, dying on March 1922. His last words were for his family: "Txomin (a good friend), take care of my wife and daughter.

The fans of Athletic assure that you can change your wife (or she can change you for anyone else), your newspaper, you teeth-brush, the game, friends, car or whiskey... but not my Athletic". Now that we are celebrating the 100 anniversary of Pichichi, no one forgets the myth and the oldest ones still remember the old victorious chant of Teresita Zazá:


Starting with Pichichi,
Ending up with Apón.
Alirón, Alirón,
Athletic, champion!
In 1953, the newspapers Marca and the disappeared Arriba created the unofficial award for the top scorers of La Liga. Unofficial since it is based on the Marca journalist decisions, not the official reports of the referees. The also Athletic player, Telmo Zarra, another legend of Athletic, was the first player to win the award... only the first of the 6 awards he achieved at the end of his career, setting an individual record of goals in one season (38) only beaten by Cristiano Ronaldo's epic record last season (41 goals). Later on, they also recgnized the previous top scorers of La Liga.